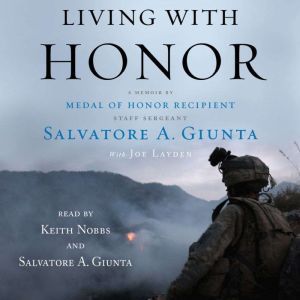 Living With Honor: A Memoir by America's First Living Medal of Honor Recipient Since the Vietnam War

A compelling memoir from a true hero—and one of the few living persons to ever be awarded the celebrated Medal of Honor.Sal Giunta was just a regular kid from Iowa when he enlisted in the army to figure out what to do with his life. He never thought that a few tours of duty later, he would be the first living person since the Vietnam War to be awarded the esteemed Medal of Honor.     First stationed in Italy and then deployed into Afghanistan, Giunta had a firsthand perspective of the ground war and its daily difficulties—some quotidian in nature, some anything but. He and around 150 of his company were stationed in the dangerous Korengal Valley in 2007, where some of the most intense fighting in the war had taken place. Giunta called it, “basically hell on earth.”      Late one night in October of 2007, Giunta’s company embarked on a sting operation into the Taliban’s forces. They were ambushed on a rugged mountain path by twenty insurgents. Giunta sprang into action and with little regard for his own safety, he withstood enemy fire to administer medical aid to his wounded fellow soldiers—even rescuing one soldier who was being carried away by the insurgents—until his squad reached safety.      For the unrivaled bravery and selflessness of his actions, Giunta was awarded the Medal of Honor by President Obama. In this fascinating and riveting memoir, he depicts the realities of war, as well as the moment-by-moment details of the event that earned him the nation’s highest distinction.