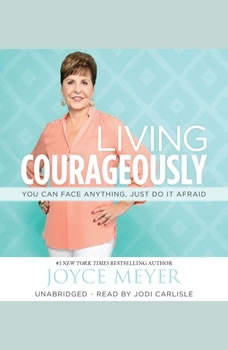 Living Courageously: You Can Face Anything, Just Do It Afraid

You have fear. And if you don't face your fear, it can paralyze you and hold you back from enjoying life to the fullest. Joyce Meyer, #1 New York Times bestselling author, wants to show you that to break out of fear, you must face it head-on. The good news is God wants to give you the strength you need to beat fear and live courageously. That's why He tells you repeatedly throughout the Bible to "fear not" because He is with you. In LIVING COURAGEOUSLY, Joyce explains how you can overcome the debilitating power of fear by learning to confront and conquer any and every fear you have. Blending practical insights, her personal experiences, and inspiring Scripture, this book will teach you how to conquer any fear, reach your greatest potential, and start living life to the fullest. Whether you fear being inadequate, being rejected, or losing control, you can learn how to triumph over any obstacle-even when you feel fearful. You can face anything and just "do it afraid!" Chapter titles include:Say Good-bye to FearThe Source of FearCultivating CourageThe Creative Power of Fear and FaithDo It Afraid!