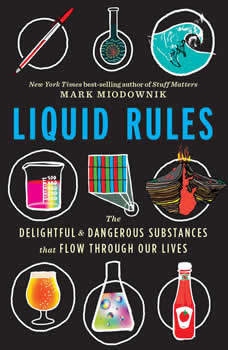 Liquid Rules: The Delightful and Dangerous Substances That Flow Through Our Lives

Sometimes explosive, often delicious, occasionally poisonous, but always interesting: the New York Times best-selling author of Stuff Matters show us the secret lives of liquids: the shadow counterpart of our solid "stuff." We all know that without water we couldn't survive, and that sometimes a cup of coffee or a glass of wine feels just as vital. But do we really understand how much we rely on liquids, or the destructive power they hold? Set over the course of a flight from London to San Francisco, Liquid Rules offers readers a fascinating tour of these formless substances, told through the language of molecules, droplets, heartbeats, and ocean waves. Throughout the trip, we encounter fluids within the plane-from a seemingly ordinary cup of tea to a liquid crystal display screen-and without, in the volcanoes of Iceland, the frozen expanse of Greenland, and the marvelous California coastline. We come to see liquids as substances of wonder and fascination, and to understand their potential for death and destruction. Just as in Stuff Matters, Mark Miodownik's unique brand of scientific storytelling brings liquids and their mysterious properties to life in a captivating new way.