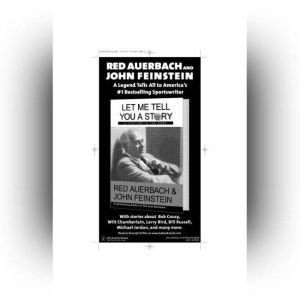 Let Me Tell You a Story: A Lifetime in the Game

America's favorite sportswriter teams up with Red Auerbach, the most successful and admired coach in basketball history, to tell the best stories of a legendary life.Living legend Arnold "Red" Auerbach led the Boston Celtics to nine NBA championships, eight of them consecutive, during his 17 year tenure in Boston, from 1950 to 1966. The fiery coach is a unique personality; brash, opinionated, and unfailingly accurate. As a coach, he never stood still along the sidelines, and in retirement he remains a lively part of the game, still consulted by coaches, players, and general managers at age 86.For years, John Feinstein has met regularly with Red Auerbach and his friends, drawing out Red's life story in a raucous series of unforgettable sessions. From those smoke-and laughter-filled rooms come the colorful reports about all the players and coaches Red has worked with and played against over the years. Bob Cousy, Larry Bird, Wilt Chamberlain, Sam Jones, Bill Russell, and Michael Jordan, you name them, the basketball greats are all here.Red Auerbach's incredible experiences in sports and John Feinstein's unparalleled skill as a sports storyteller make this one of the greatest books to come out of the game of basketball.