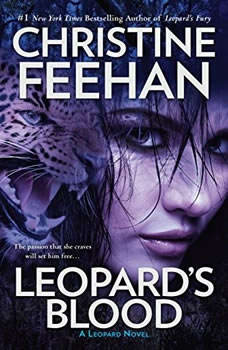 #1 New York Times bestselling author Christine Feehan cuts straight to the heart of a man who stalks the shadows in an intoxicating Leopard novel. Though born into a leopard's lair in the bayou, Joshua Tregre's fighting skills were honed in the rainforests of Borneo. Sleek and deadly, he's the perfect man to take over a crime syndicate back home in Louisiana's lush swamplands. His razor sharp instincts give him an edge in the violent underworld he knows so well, but even the watchful leopard inside him isn't prepared for the danger that comes from the girl next door. She is a woman who can create beauty out of thin air-and out of the ruins of her own life. The games that dangerous men play have taken their toll on her, but she is bent, not broken. And it's her fierce spirit that's like a lure to Joshua, a temptation he can't resist-even if it means bringing his true nature into the light.

As the vampire warriors defend their race against their slayers, one male’s loyalty to the Black Dagger Brotherhood will be tested in this breathtaking novel in J. R. Ward’s #1 New York Times bestselling paranormal romance series. ...

The Chosen
by J.R. Ward

He keeps his emotions on a tight leash, but she can see the desire burning in his eyes...Timur Amurov has one purpose in life: protect his family at all costs. With lethal skills honed from a violent upbringing, Timur is a leopard shifter who sees a...

Rhage and Mary return in a new novel of the Black Dagger Brotherhood, a series “so popular, I don’t think there’s a reader today who hasn’t at least heard of [it]” (USA Today).   Nothing is as it used to be for th...

The King
by J.R. Ward

J.R. Ward's # 1 New York Times bestselling Black Dagger Brotherhood continues as a royal bloodline is compromised by a grave threat to the throne.Long live the King… After turning his back on the throne for centuries, Wrath, son of Wrath, fina...