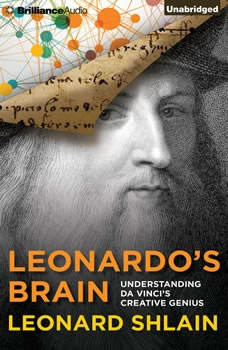 Bestselling author Leonard Shlain explores the life, art, and mind of Leonardo da Vinci, seeking to explain his singularity by looking at his achievements in art, science, psychology, and military strategy (yes), and then employing state of the art left-right brain scientific research to explain his universal genius. Shlain shows that no other person in human history has excelled in so many different areas as Da Vinci and he peels back the layers to explore the how and the why. Leonardo’s Brain uses Da Vinci as a starting point for an exploration of human creativity. With his lucid style, and his remarkable ability to discern connections in a wide range of fields, Shlain brings the listener into the world of history’s greatest mind.Shlain asserts that Leonardo’s genius came from a unique creative ability that allowed him to understand and excel in a wide range of fields. From here Shlain jumps off and discusses the history and current research on human creativity that revolves around the right brain-left brain split. Most of us now know that there is a split between the right and the left side of the brain; the left primarily controls our rational mind, the right our emotions.Shlain discusses the cutting edge research that is refining our understanding of the split brain model and deepening our knowledge about the nature of human creativity. There is more integration between the left and right brains than previously thought. Shlain argues that Leonardo was unique in human history for the degree of integration that he showed. He also speculates on whether or not the qualities of Leonardo’s brain and his creativity presage the future evolution of man.Leonardo’s Brain integrates art, history, science, medicine, neuroscience, psychology, and philosophy uniting all of the ideas that Leonard Shlain studied and wrote about since the publication of the influential and bestselling Art and Physics in 1991.

Who changed the sex of God? This groundbreaking book proposes that the rise of alphabetic literacy reconfigured the human brain and brought about profound changes in history, religion, and gender relations. Making remarkable connections across brai...

The Ugly Renaissance
by Alexander Lee

A fascinating and counterintuitive portrait of the sordid, hidden world behind the dazzling artwork of Michelangelo, Leonardo da Vinci, Botticelli, and more Renowned as a period of cultural rebirth and artistic innovation, the Renaissance is cl...

From the inimitable bestselling author Thomas Cahill, another popular history—this one focusing on how the innovations of the Renaissance and the Reformation changed the Western world. A truly revolutionary book. In Volume VI of his accla...

The Renaissance – In a Nutshell
by Peter Whitfield

The fifth in the new Naxos Audiobooks series ‘In a Nutshell’, The Renaissance is a short and accessible introduction to the era that gave us Leonardo da Vinci, Michelangelo and Palestrina. The Renaissance swept across Europe between the ...

The House of Medici
by Christopher Hibbert

At its height, Renaissance Florence was a center of enormous wealth, power, and influence. A republican city-state funded by trade and banking, its often bloody political scene was dominated by rich mercantile families, the most famous of which were...

NEW YORK TIMES BESTSELLERThe history books have cast Katherine of Aragon, the first queen of King Henry VIII of England, as the ultimate symbol of the Betrayed Woman, cruelly tossed aside in favor of her husband’s seductive mistress, Anne Bole...

The Family Medici
by Mary Hollingsworth

Having founded the bank that became the most powerful in Europe in the fifteenth century, the Medici gained massive political power in Florence, raising the city to a peak of cultural achievement and becoming its hereditary dukes. Among their number...

The startling truth behind one of the most notorious dynasties in history is revealed in a remarkable new account by the acclaimed author of The Tudors and A World Undone. Sweeping aside the gossip, slander, and distortion that have shrouded the Bor...

The Catalogue of Shipwrecked Books
by Edward Wilson-Lee

Named a Best Book of the Year by: * Financial Times * New Statesman * History Today * The Spectator * “Like a Renaissance wonder cabinet, full of surprises and opening up into a lost world.” —Stephen Greenblatt The impeccably resea...