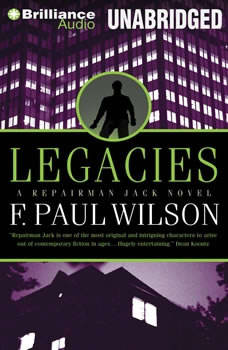 Dr. Alicia Clayton has inherited the family home, a place that holds such dark memories for her than she wants it razed. But someone will go to any lengths - even murder - to prevent that. Why? What secret does the house hold that makes it worth killing for? She hasn't enough to go to the police, so she turns to an urban mercenary known as Repairman Jack. Praise for F. Paul Wilson’s Repairman Jack: "One of the all-time great characters in one of the all-time great series." —Lee Child “Repairman Jack is one of my favorite characters—I’m full of happy anticipation every time I hold a new RJ novel in my hands.” —Charlaine Harris, creator of True Blood “The Tomb is one of the best all-out adventure stories I’ve read in years.” —Stephen King "Repairman Jack is one of the most original and intriguing to arise out of contemporary fiction in ages. His adventures are hugely entertaining." —Dean Koontz "F. Paul Wilson is a hot writer, and his hottest and my favorite creation is Repairman Jack." - Joe R. Lansdale “F. Paul Wilson’s Repairman Jack is a cultural icon. If you haven’t crossed paths with him you’re out of the loop. Get with the program.” —David Morrell, creator of Rambo. Repairman Jack is one of the greatest fictional characters created by any thriller writer in the past half century. If you haven't discovered him and his world yet, what a fabulous, extraordinary, and electric reading experience awaits you." —Douglas Preston, co-creator of the Pendergast novels "I'm a Repairman Jack addict. Be warned: Read one book and you'll become one, too. If you've got an impossible problem to solve, he's the one guy you want in your corner: flawed, conflicted, and oh-so-wonderfully brutal. Each book is a sweet hit of pure adrenaline. Pick up a copy and get hooked today." —James Rollins, New York Times bestseller of The Doomsday Key Jack is righteous!” —Andrew Vachss