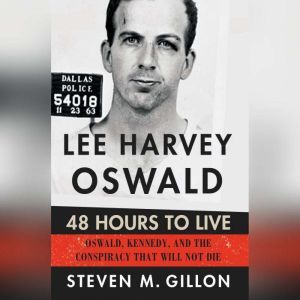 Lee Harvey Oswald: 48 Hours to Live: Oswald, Kennedy and the Conspiracy that Will Not Die

Steve Gillon follows Lee Harvey Oswald for the 48 hours after the Kennedy assassination in search of answers to the question that has been troubling America for the past five decades: Why did he shoot JFK? The Warren Commission speculated that Oswald was simply a deranged sociopath. But recently declassified materials raise new troubling questions. Where was Oswald going when he fled the School Book Depository Building on Friday afternoon? Is it possible that Cuban intelligence officials may have encouraged Oswald to commit the crime and promised to help him escape? This audiobook goes back to the Dallas Municipal Building and recreates the interrogation sessions. What emerges from this expose is refreshingly new, and more complicated, portrait of the man who assassinated President John F. Kennedy.