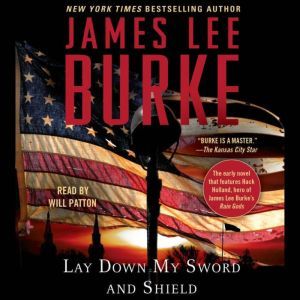 Lay Down My Sword and Shield

Now available on audio for the first time, the classic novel marking the debut of James Lee Burke’s Hack Holland. Hackberry Holland, cousin of beloved James Lee Burke hero Billy Bob Holland, made his debut in Lay Down My Sword and Shield, originally published in 1971. Now, fans can learn about Hack’s colorful history, forged against the backdrop of the civil rights era. In hot and sultry Texas, Hack, an attorney and Korean War POW, is being pushed by his wife, his brother, and his so-called friends in the oil business to run for political office. But Hack would prefer to drink, look after his beloved horses, and represent the occasional long-shot pro bono case at his law firm. When Hack attempts to overturn a conviction for an old army buddy, he finds himself embroiled in the seamy underbelly of the Texas patronage system—and in the earliest beginnings of the United Farm Workers movement, led by a beautiful woman who speaks to his heart in a way no one else has. As Hack begins to bring justice to the underserved, he finds both a new love and a new purpose. With his skillful blend of engaging plotlines, compelling characters, and graceful prose, James Lee Burke demonstrates the shimmering clarity of vision that has made him beloved by suspense fans all over the globe.