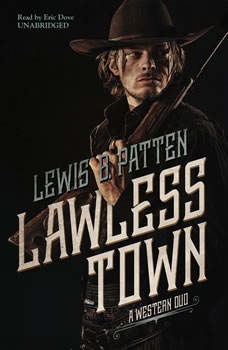 Death of a Gunfighter Walt Street is on a stagecoach bound for Escalante, Colorado, where he hopes to reunite with his wife after two years of living without violence at her request. But when fellow passenger Ben Rawlins recognizes him as a man with a bounty on his head, a struggle ensues and Rawlins ends up dead. Walt switches identities and all is well until he finds out that Rawlins has inherited a small ranch that the neighboring Gunhammer Ranch wants. He cant sell because hes not Rawlins, but the Gunhammer crew thinks he just needs some strong-armed persuasion. Lawless Town Sloan Hewitt was just a passing stranger. All he wanted was to sell his wagonload of buffalo hides, get a drink, a bath, and a good nights sleep. Hewitt didnt know about the towns dark desires. As a former soldier, hed had his fill of killing. But when three gunmen ambush, rob, and leave him for dead, Hewitt sees just how hungry the town is for blood. Soon after Sloan Hewitt takes care of the sidewinders whod bushwhacked him, someone decided to pin a marshals badge on him. He didnt want the job, but someone had to teach this town a lesson, and hes just the man to give this place a dose of its own lead poisoning.