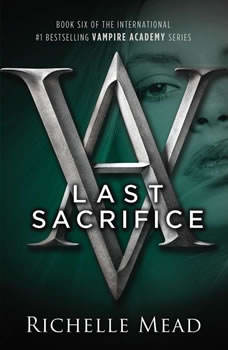 The astonishing conclusion to the #1 international bestselling series...

The Queen is dead and the Moroi world will never be the same. Now, with Rose awaiting wrongful execution and Lissa in a deadly struggle for the royal throne, the girls find themselves forced to rely upon enemies and to question those they thought they could trust. . . .

But what if true freedom means sacrificing the most important thing of all?

Can't get enough? Look out for Bloodlines, Richelle Mead's bestselling spinoff series set in the world of Vampire Academy!

The Indigo Spell
by Richelle Mead

Sydney Sage is an Alchemist, one of a group of humans who dabble in magic and serve to bridge the worlds of humans and vampires. They protect vampire secrets—and human lives.In the aftermath of a forbidden moment that rocked Sydney to her core...

The first book in Richelle Mead's brand-new teen fiction series - set in the same world as Vampire Academy.When alchemist Sydney is ordered into hiding to protect the life of Moroi princess Jill Dragomir, the last place she expects to be sent is a h...

The Golden Lily
by Richelle Mead

Prepare to be Tested.The story that kicked off Richelle Mead’s international #1 bestselling Vampire Academy series is NOW A MAJOR MOTION PICTURE.Read it Before it Hits Theaters February 14th, 2014!The thrilling second installment in Richelle M...