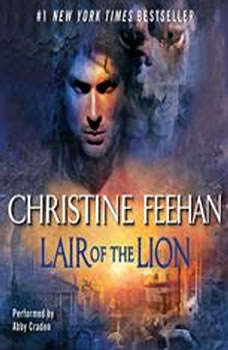 Lair of the Lion

The Beast . . .Rumor said the powerful Nicolai DeMarco could command the heavens, that the beasts below did his bidding . . . and that he was doomed to destroy the woman he took as wife. It was whispered he was not wholly human—as untamed as his tawny mane and slashing amber eyes.The Beauty . . .Impoverished aristocrat Isabella Vernaducci would defy death itself to rescue her imprisoned brother. She’d even brave the haunted, accursed lair of the lion—the menacing palace of legendary, lethal Don Nicolai DeMarco.The Bargain . . .Then Isabella met a man whose growl was velvet, purring heat, whose eyes held dark, all-consuming desire. And when the don commanded her to become his bride, she went willingly into his muscled arms, praying she’d save his tortured soul . . . not sacrifice her life.

He woke deep within the ground, and the first sensation he felt was hunger. An overwhelming hunger for blood that demanded satisfaction. But as he hunted the dark streets of Paris for prey, a voice called to him, soothing, calming, giving him the s...

I am Meredith, princess of faerie, wielder of the hands of Flesh and Blood, and at long last, I am with child–twins, fathered by my royal guard. Though my uncle, Taranis, King of Light and Illusion, claims that he is the true father since he a...

Lead guitarist of the Dark Troubadours, Dayan was renowned for his mesmerizing performances. His melodies stilled crowds, beckoned, seduced. And always, he called to her to complete him. Corinne Wentworth stood at the vortex of a gathering storm. P...

The Scarletti Curse
by Christine Feehan

Strange, twisted carvings and hideous gargoyles adorn the palazzo of the great Scarletti family. But a more fearful secret lurks within its storm-tossed turrets. For every bride who enters its forbidding walls is doomed to leave in a casket.Nicolet...

A Woman Without Lies
by Elizabeth Lowell

An artist in glass and light, Angel has loved with passion and fire—and learned the true depths of sadness when what she loved was taken from her. When she first meets Miles Hawkins—a solitary, distant man—their mutual mistrust see...

ANALISA.… He whispers her name, and it echoes back to him on the wings of the night. She is so young, so alive. She radiates warmth and goodness, chasing the coldness from his being, banishing the loneliness from his soul. In four centuries of...

Halfway to the Grave
by Jeaniene Frost

Halfvampire Catherine Crawfield is going after the undead with a vengeance, hoping that one of these deadbeats is her fatherthe one responsible for ruining her mother's life. Then she's captured by Bones, a vampire bounty hunter, and is forced into ...

Oceans of Fire
by Christine Feehan

New York Times best-selling author Christine Feehan is "the reigning queen of paranormal romance" (Publishers Weekly). A mesmerizing blend of suspense and sensuality with a mystical twist, Oceans of Fire roars with waves of passion. To save her life...

Great sex and a nice story