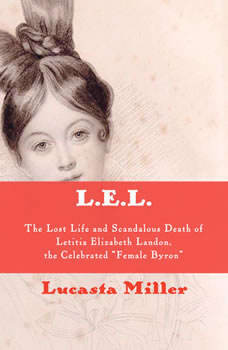 "None among us dares to say / What none will choose to hear"--L.E.L., "Lines of Life"
Letitita Elizabeth Landon--pen name L.E.L.--dared to say it and made sure she was heard.
Hers was a life lived in a blaze of scandal and worship, one of the most famous women of her time, the Romantic Age in London's 1820s, her life and writing on the ascendency as Byron's came to an end.
Lucasta Miller tells the full story and re-creates the literary London of her time. She was born in 1802 and was shaped by the aftermath of the Napoleonic Wars, a time of conservatism when values were in flux. She began publishing poetry in her teens and came to be known as a daring poet of thwarted romantic love. We see L.E.L. as an emblematic figure who embodied a seismic cultural shift, the missing link between the age of Byron and the creation of Victorianism. Miller writes of Jane Eyre as the direct connection to L.E.L.--its first-person confessional voice, its Gothic extremes, its love triangle, and in its emphasis on sadomasochistic romantic passion.