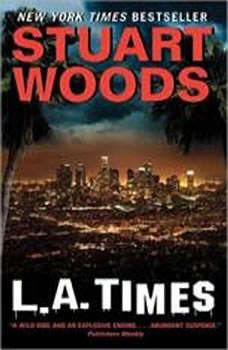 Vinnie Callabrese toils in the mean world of a Mafia hood, violently enforcing his loan-shark boss's debt collections, but he lives in the world of the movies, one where he can tie a bow tie like Cary Grant and speak with the voice of Tyrone Power.Vinnie is smart, too, and he finds a way to turn his dream world into reality. Arriving on the West Coast with a new identity and some ill-gotten gains, Vinnie discovers that his sociopathic nature is just the ticket for handling the intrigues of tinseltown. He employs his old techniques of deceit, coercion, sexual conquest -- even murder -- to carve out a place at the top of the film industry.But Vinnie's old neighborhood friends have excellent memories and a long reach, and soon his fast-track career is facing derailment -- or even worse, a new driver at the controls.Performed by Tony Roberts

Any book by Stuart Woods is sure to please. I have yet to read a book by him that doesn't hold my attention and make me read from cover to cover. This book was no different. Keeps you hooked to the very end. This book is a must read.