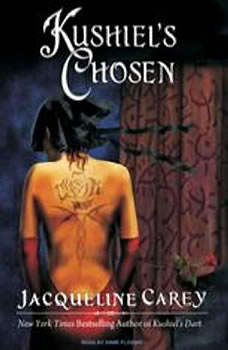 Mighty Kushiel, of rod and weal Late of the brazen portals With blood-tipp'd dart a wound unhealed Pricks the eyen of chosen mortals. The land of Terre d'Ange is a place of unsurpassed beauty and grace. The inhabiting race rose from the seed of angels and men, and they live by one simple rule: Love as thou wilt. Phèdre nó Delaunay was sold into indentured servitude as a child. Her bond was purchased by a nobleman, the first to recognize that she is one pricked by Kushiel's Dart, chosen to forever experience pain and pleasure as one. He trained Phèdre in the courtly arts and the talents of the bedchamber—and, above all, the ability to observe, remember, and analyze. When she stumbled upon a plot that threatened the very foundations of her homeland, she gave up almost everything she held dear to save it. She survived, and lived to have others tell her story, and if they embellished the tale with fabric of mythical splendor, they weren't far off the mark. The hands of the gods weigh heavily upon Phèdre's brow, and they are not finished with her. While the young queen who sits upon the throne is well loved by the people, there are those who believe another should wear the crown...and those who escaped the wrath of the mighty are not yet done with their schemes for power and revenge.

Heir to the Shadows
by Anne Bishop

In this violently passionate, "darkly fascinating world,"** the Blood rule: a race of witches and warlocks whose power is channeled through magical jewels. Ambitions unfurl in this second novel of The Black Jewels Trilogy, as the realm's dreams of a...