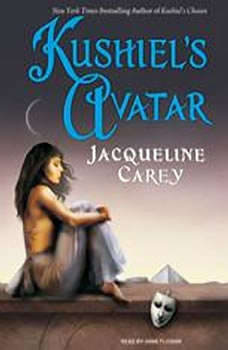 The land of Terre d'Ange is a place of unsurpassed beauty and grace. It is said that angels found the land and saw it was good...and the ensuing race that rose from the seed of angels and men live by one simple rule: Love as thou wilt. Phèdre nó Delaunay is a woman pricked by Kushiel's Dart, chosen to forever experience pain and pleasure as one. Her path has been strange and dangerous, and through it all the devoted swordsman Joscelin has been at her side. Her very nature is a torturous thing for them both, but he is sworn to her and he has never violated his vow: to protect and serve. But Phèdre's plans put Joscelin's pledge to the test, for she has never forgotten her childhood friend Hyacinthe. She has spent ten long years searching for the key to free him from his eternal indenture, a bargain he struck with the gods—to take Phèdre's place as a sacrifice and save a nation. Phèdre cannot forgive—herself or the gods. She is determined to seize one last hope to redeem her friend, even if it means her death. The search will bring Phèdre and Joscelin across the world, to distant courts where madness reigns and souls are currency, and down a fabled river to a land forgotten by most of the world. And to a power so mighty that none dare speak its name.

Rachel Morgan is a runner with the Inderland Runner Services, apprehending law-breakers throughout Cincinnati. She's also a witch, one of the many Inderlanders who revealed themselves after a genetically engineered virus wiped out 50 percent of huma...

The Dresden Files have taken the genre of paranormal mystery to a new level of action, excitement, and hard-hitting magical muscle. Now, in Death Masks, Jim Butcher’s smart-guy private eye may have taken on more than he ever wanted to han...

Every Which Way but Dead
by Kim Harrison

Mighty Kushiel, of rod and weal Late of the brazen portals With blood-tipp'd dart a wound unhealed Pricks the eyen of chosen mortals. The land of Terre d'Ange is a place of unsurpassed beauty and grace. The inhabiting race rose from the seed of ...