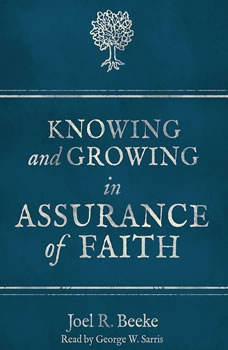 Knowing and Growing in Assurance of Faith

Assurance of faith is the conviction that one belongs to Christ through faith and will enjoy everlasting salvation. It is more than believing the gospel - it is believing that these truths apply to you. Having assurance affects life in more ways than forgiveness of sin, alleviation of guilt, and salvation from the punishment of hell - it affects your whole being, firing up your affections for Christ, your unshakable trust in God, your burden for the unsaved and your joy in life and even death.

Can I Lose My Salvation?
by R. C. Sproul

Whether you can lose your salvation is one of the most pressing issues you can face as a Christian. In an uncertain world, painfully aware of the continued reality of their sin, and confronted by the Bible’s warnings about falling away, Christ...

The Gospel According to Jesus
by John F. MacArthur

The first edition of The Gospel According to Jesus won wide acclaim in confronting the a€œeasy-believisma€ that has characterized some aspects of evangelical Christianity. Over the past 50 years, a handful of books have become true c...

The Gospel's Power and Message
by Paul Washer

One of the greatest crimes of this generation of Christians is its neglect of the gospel, and it is from this neglect that all our other maladies spring forth. Absent from too many pulpits are the essential themes which make up the very core of the ...

What does real, saving faith actually entail? The New Testament repeatedly emphasizes the need for repentance from sin and accompanying good works as evidence of true belief. However, as theologian Wayne Grudem argues in this book, the teachings of ...

Jesus and the Jewish Roots of the Eucharist
by Brant Pitre

In recent years, Christians everywhere are rediscovering the Jewish roots of their faith. Every year at Easter time, many believers now celebrate Passover meals (known as Seders) seeking to understand exactly what happened at Jesus’ final Pass...

Since the days of the early church, Christians have struggled to understand the relationship between two seemingly contradictory concepts in the Bible: law and gospel. If, as the apostle Paul says, the law cannot save, what can it do? Is it merely a...

Where I Am
by Billy Graham

"I will come back and take you to be with me that you also may be where I am." John 14:3The Final Chapter From Billy Graham. Experience the glory of heaven as Billy Graham, the beloved evangelist, shares from his past, and his present, the reality o...

The Esther Anointing
by Michelle McClain-Walters

Be inspired by Esther, an incredible woman of God. Esther was willing to risk her life for the welfare of her people and the furthering of God’s plan. Strategically positioned by God in a place of influence, Esther is a powerful biblical examp...

It should come as no surprise that misunderstandings about the gospel message and the nature of true conversion result in a problem with genuine assurance of salvation. A pseudo-gospel of easy believism has led many into careless presumption, and a ...