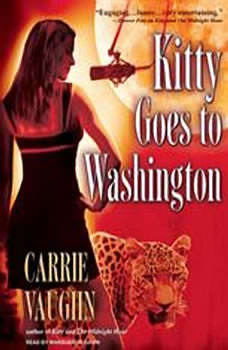 The country's only celebrity werewolf, late-night radio host Kitty Norville prefers to be heard, not seen. But when she's invited to testify at a Senate hearing on behalf of supernaturals, her face gets plastered on national television. Kitty has been in hot water before, but jumping into the D.C. underworld brings a new set of problems—and a new set of friends and enemies, including the vampire mistress of the city; a super-hot Brazilian were-jaguar; and a paranoid, Bible-thumping senator who wants to expose Kitty as a monster. Kitty quickly learns that in this city of dirty politicians and backstabbing pundits, everyone's itching for a fight.

IMO not as good as the first. This time Kitty goes to Washington.D.C. to testify in a paranoraml hearing, while there she meets a sexy were-jaguar and makes friends with the Mistress of Washington. Kitty also finds herself in trouble that ends with her shifting live in front of millions of TV. This was a good read but I found the story to drag until the very end. The decimation of the Smith was a little hurried and anticlimaticwhich Kitty herself admits in the book but all and all it was an enjoyable enough read to make me continue the series.