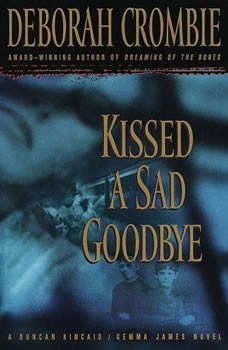 Reminiscent of Ruth Rendell, multiple award-winning author Deborah Crombie creates graceful mysteries, resonating with lyrical prose, elegant suspense, and finely-drawn characters. This is her darkly irresistible tale of friendship shattered by shocking betrayal, and repercussions that echo down through the years. A stunningly beautiful young woman is found strangled in London's Mudchute Park, her clothing carefully arranged to preserve her modesty. With that unusual detail in mind, Detective Superintendent Duncan Kincaid and his partner Sergeant Gemma James suspect the crime was more than a simple assault gone awry. As they collect the strange facts surrounding her death, they discover the victim's life was a mystery even to those who knew her best. Internationally-acclaimed author Deborah Crombie brilliantly weaves together events of World War II England with complex problems of present-day London. As British actor Jenny Sterlin's superb dramatization unfolds, you'll understand why this crime novel is as at home on the bookshelf with literary novels as it is with the most baffling whodunit.

The Devil's Feather
by Minette Walters

In each of her ten critically acclaimed and hugely popular novels, Minette Walters has explored the dark terrain of the human psyche to give us thrillers of exceptional psychological complexity and suspense. Now, in The Devil's Feather, she gives us...

The Lighthouse
by P. D. James

A subtle and powerful work of contemporary fiction.Combe Island off the Cornish coast has a bloodstained history of piracy and cruelty but now, privately owned, it offers respite to over-stressed men and women in positions of high authority who requ...

Commander Adam Dalgliesh, P. D. James’s formidable and fascinating detective, returns to find himself enmeshed in a terrifying story of passion and mystery -- and in love.The Dupayne, a small private museum in London devoted to the interwar ye...

4:50 From Paddington
by Agatha Christie

In Agatha Christie’s classic mystery 4:50 From Paddington, a woman in one train witnesses a murder occurring in another passing one…and only Miss Marple believes her story.For an instant the two trains ran side by side. In that frozen m...

Dreaming of the Bones
by Deborah Crombie