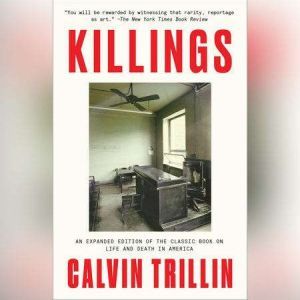 “Reporters love murders,” Calvin Trillin writes in the introduction to Killings. “In a pinch, what the lawyers call ‘wrongful death’ will do, particularly if it’s sudden.” Killings, first published in 1984 and expanded for this edition, shows Trillin to be such a reporter, drawn time after time to tales of sudden death. But Trillin is attracted less by violence or police procedure than by the way the fabric of people’s lives is suddenly exposed when someone comes to an untimely end.  As Trillin says, Killings is “more about how Americans live than about how some of them die.”

These stories, which originally appeared in The New Yorker between 1969 and 2010, are vivid portraits of lives cut short. An upstanding farmer in Iowa finds himself drastically changed by a woman he meets in a cocktail lounge. An eccentric old man in Eastern Kentucky is enraged by the presence of a documentary filmmaker. Two women move to a bucolic Virginia county to find peace, only to end up at war over a shared road. Mexican American families in California hand down a feud from generation to generation. A high-living criminal-defense lawyer in Miami acquires any number of enemies capable of killing him.

“Riveting tales of murder and mayhem. . . . [Calvin] Trillin is a superb writer, with a magical ability to turn even the most mundane detail into spellbinding wonder. Armed with this wealth of material, he utterly shines. Every piece here is a gem.”—The Seattle Times

“What Mr. Trillin does so well, what makes Killings literature, is the way he pictures the lives that were interrupted by the murders. Even the most ordinary life makes a terrible noise . . . when it’s broken off.”—Anatole Broyard, The New York Times

“Fascinating, troubling . . . In each of these stories is the basis of a Dostoevskian novel.”—Edward Abbey, Chicago Sun-Times

“The stories . . . are unforgettable. They leave us, finally, with the awareness of the unknowable opacity of the human heart.”—Bruce Colman, San Francisco Chronicle

“In his artful ability to conjure up a whole life and a whole world, Trillin comes as close to achieving the power of a Chekhov short story as can anyone whose material is so implacably tied to fact.”—Frederick Iseman, Harper’s Bazaar

“I have a book for you true-crime addicts if you’re caught up on the podcast Serial, the cascade on TV of 48 Hours and Dateline NBC episodes. . . . It’s time to pick up Calvin Trillin’s Killings.”—The New York Times Book Review

“Well-crafted and thoughtfully composed, lacking judgment and admonishment, these are a true piece of quality journalism, which clearly continues to captivate audiences.”—Library Journal

“With telling detail and shrewd insights, [Calvin Trillin] masterfully evokes the places and personalities that hatched these grim episodes.”—Publishers Weekly