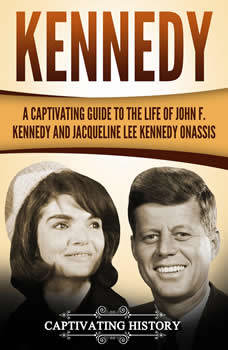 Kennedy: A Captivating Guide to the Life of John F. Kennedy and Jacqueline Lee Kennedy Onassis

Explore the Lives and Relationship of John and Jackie

Gallup’s List of Widely Admired People of the Twentieth Century places President John F. Kennedy in the third slot, behind Martin Luther King, Jr., and Mother Teresa. Needless to say, President Kennedy’s name is one that will not soon be forgotten.

Some of the topics covered in the first part of this audiobook include:

Without a doubt, the name Jackie Kennedy draws multiple thoughts to mind; she is, perhaps, most well-known in her service as the first lady of the United States, as her husband, John F. Kennedy, took office as the president, and her role in restoring the White House.

Some of the topics covered in the second part of this audiobook include:

Scroll to the top and select the "add to cart" button to learn more about John F. Kennedy and Jackie Kennedy!