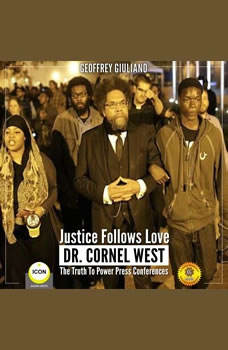 This stirring, evocative, one-of-a-kind new audiobook from historian and author Geoffrey Giuliano chronicles the legendary scholar, social reformer, activist and author, the charismatic, Dr. Cornel West, in a loving tribute to his great work and exemplary life. Here is the lauded university professor and folksy intellectual up close and personal exposing his sage ideals in own inimitable, stylish, endearing way. Who else in this weary world can confound and confront even his enemies yet engender smiles on the faces of all? This great man continues his mission to enlighten, educate, and counsel folks everywhere in his sometimes fierce, though always concerned and loving way. Here is Dr. West in his own words, in his own time, a charismatic apostle of that mercurial Love Supreme. A must for all university and academic collections. The author will be donating all of his proceeds to the Vrndavan Widows & Childrens Fund. Music by AudioNautix.