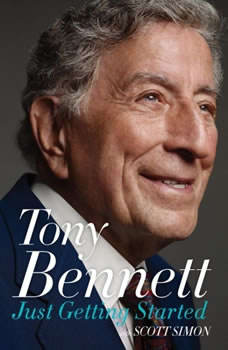 At ninety, musician and singer Tony Bennett is as vibrant and productive as ever. In addition to his prodigious musical output, including albums, concerts, and personal appearances, this beloved and enduring artist has written his second book. In 2012’s Life Is a Gift, Tony reflected on the lessons he has learned over the years. Now, in Just Getting Started, he pays homage to the remarkable people who inspired those lessons.In his warm and inviting style, Tony talks about who and what have enriched his own life, including Charlie Chaplin, Judy Garland, Dr. Martin Luther King, Jr., Cole Porter, Amy Winehouse, Fred Astaire, Lady Gaga, members of his family, significant places, and more. Just Getting Started chronicles the relationship Tony has enjoyed with each one of these legends, entertainers, humanitarians, and loved ones, and reveals how the lessons and values they imparted have invaluably shaped his life.As enchanting and unforgettable as his music, Just Getting Started is a beautiful compilation of reflections every Bennett fan will treasure, and a perfect introduction for those just getting to know this remarkable star and humanitarian.

In his first and only official autobiography, music icon Elton John reveals the truth about his extraordinary life, from his rollercoaster lifestyle as shown in the film Rocketman, to becoming a living legend.Christened Reginald Dwight, he was a shy...