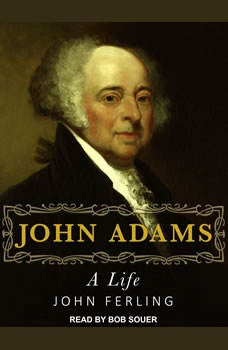 John Ferling has nearly forty years of experience as a historian of early America. The author of acclaimed histories such as A Leap into the Dark and Almost a Miracle, he has appeared on many TV and film documentaries on this pivotal period of our history. In John Adams: A Life, Ferling offers a compelling portrait of one of the giants of the Revolutionary era. Drawing on extensive research, Ferling depicts a reluctant revolutionary, a leader who was deeply troubled by the warfare that he helped to make, and a fiercely independent statesman. The book brings to life an exciting time, an age in which Adams played an important political and intellectual role. Indeed, few were more instrumental in making American independence a reality. He performed yeoman's service in the Continental Congress during the revolution and was a key figure in negotiating the treaty that brought peace following the long War of Independence. He held the highest office in the land and as president he courageously chose to pursue a course that he thought best for the nation, though it was fraught with personal political dangers. Adams emerges here a man full of contradictions. He could be petty and jealous, but also meditative, insightful, and provocative. In private and with friends he could be engagingly witty. He was terribly self-centered, but in his relationship with his wife and children his shortcomings were tempered by a deep, abiding love. John Ferling's masterful John Adams: A Life is a singular biography of the man who succeeded George Washington in the presidency and shepherded the fragile new nation through the most dangerous of times.