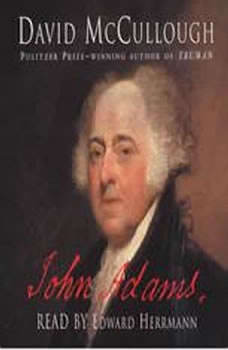 In this powerful, epic biography, David McCullough unfolds the adventurous life-journey of John Adams, the brilliant, fiercely independent, often irascible, always honest Yankee patriot who spared nothing in his zeal for the American Revolution; who thought, wrote, and spoke out for the "Great Cause" come what might, who traveled far and wide in all seasons and often at extreme risk; who rose to become the second President of the United States and saved the country from blundering into an unnecessary war; who was rightly celebrated for his integrity, and regarded by some as "out of his senses"; and whose marriage to the wise and valiant Abigail Adams is one of the moving love stories in American history. Much about John Adam's life will come as a surprise to many. His rocky relationship with friend and eventual archrival Thomas Jefferson, his courageous voyage on the frigate Boston in the winter of 1778 and his later trek over the Pyrenees are exploits few would have dared and that few listeners will ever forget. Like his masterful, Pulitzer Prize-winning biography Truman, David McCullough's John Adams has the sweep and vitality of a great novel. This is history on a grand scale -- an audiobook about politics and war and social issues, but also about human nature, love, religious faith, virtue, ambition, friendship and betrayal, and the far-reaching consequences of noble ideas. Above all, it is an enthralling, often surprising story of one of the most important and fascinating Americans who ever lived.

The Rise of Theodore Roosevelt
by Edmund Morris

Selected by the Modern Library as one of the 100 best nonfiction books of all timeDescribed by the Chicago Tribune as "a classic," The Rise of Theodore Roosevelt stands as one of the greatest biographies of our time. The publication of The Rise of...

A masterly, posthumous work by the New York Times bestselling author of Churchill and GladstoneA protean figure and a man of massive achievement, Franklin Delano Roosevelt was the only man to be elected to the presidency more than twice. In a rankin...

My Life
by Bill Clinton

President Bill Clinton’s My Life is the strikingly candid portrait of a global leader who decided early in life to devote his intellectual and political gifts, and his extraordinary capacity for hard work, to serving the public. It shows us th...

The definitive biography of a larger-than-life president who defied norms, divided a nation, and changed Washington foreverAndrew Jackson, his intimate circle of friends, and his tumultuous times are at the heart of this remarkable book about the m...

Mornings On Horseback
by David McCullough

FROM THE #1 NEW YORK TIMES BESTSELLING AUTHOR OF JOHN ADAMS Winner of the 1982 National Book Award for Biography, Mornings on Horseback is the brilliant biography of the young Theodore Roosevelt. Hailed as a masterpiece by Newsday, it is the story ...

This is an amazing biography. Reads like a novel. Caused me to think that John Adams should be remembered as The Father of Our Country. Washington won the war but Adams won the peace when the country could not afford a war against France. Adams held out for diplomacy even though Washington and Hamilton were trying to push him into declaring war. Adams was a truly great President and more importantly, a Patriot in the best sense of the word.

David McCullough went above and beyond on this book. I would love to see him do books on Jefferson and Linlcon. He has done John justice and explained why and how this man rose to the level that he did. This is the first book that I have ever given 5 stars to and I would give more if I could.

I'll have to read instead of listen. Not a fan of the reader's voice and style. The thought of listening to that for 24 CD's - whew!