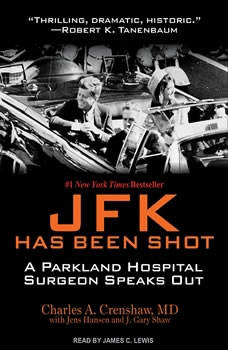 JFK Has Been Shot

On November 22, 1963, Dr. Charles Crenshaw, an accomplished surgeon, tried to save John F. Kennedy's life—and then days later, the life of the alleged assassin, Lee Harvey Oswald. His gripping, firsthand account contradicts the Warren Commission and years of public misperception, and illuminates a chapter in American history long cloaked in conspiracy. Writing with eye-opening immediacy, Dr. Crenshaw takes listeners into the emergency room to share the critical events at Parkland Hospital as he lived them. Now updated, his searing testimony punctures myths and shatters a cover-up of massive proportions.