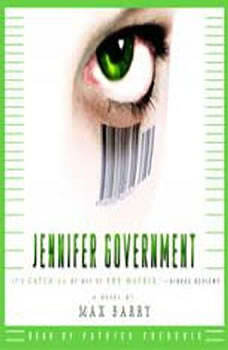 A wickedly satirical and outrageous thriller about globalization and marketing hype, Jennifer Government is the best novel in the world ever.

"Funny and clever.... A kind of ad-world version of Dr. Strangelove.... [Barry] unleashes enough wit and surprise to make his story a total blast." --The New York Times Book Review

"Wicked and wonderful.... [It] does just about everything right.... Fast-moving, funny, involving." --The Washington Post Book World

Taxation has been abolished, the government has been privatized, and employees take the surname of the company they work for. It's a brave new corporate world, but you don't want to be caught without a platinum credit card--as lowly Merchandising Officer Hack Nike is about to find out. Trapped into building street cred for a new line of $2500 sneakers by shooting customers, Hack attracts the barcode-tattooed eye of the legendary Jennifer Government. A stressed-out single mom, corporate watchdog, and government agent who has to rustle up funding before she's allowed to fight crime, Jennifer Government is holding a closing down sale--and everything must go.

In post-NK3 Los Angeles, a sixty-foot-tall fence surrounds the hills where the rich used to live, but the mansions have been taken over by those with the only power that matters: the power of memory. Life for the community inside the Fence, ruled ov...