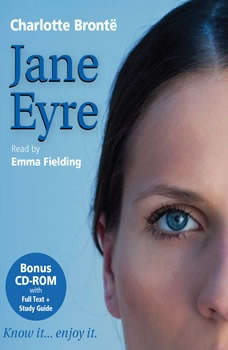 ‘Young Adult Classics’ is a new series from Naxos AudioBooks which aims to bring key works of literature to a young audience in abridged form. Lively, accessible readings with music is the key. But also important are the extra bonus CD-ROM tracks including abridged and unabridged texts, and Top Teacher’s Notes by high profile English teacher and writer Francis Gilbert. Jane Eyre is the tale of a young governess who becomes entangled with the powerful Mr Rochester, finding mystery and uneasiness in his house.

The Outsiders
by S. E. Hinton

50 years of an iconic classic! This international bestseller and inspiration for a beloved movie is a heroic story of friendship and belonging. No one ever said life was easy. But Ponyboy is pretty sure that he's got things figured out. He...

This tale follows the adventures of Anne, a young, red-haired orphan who has spent her entire childhood being passed around from one foster home to the next. Until one day she is sent to Marilla and Matthew Cuthbert by mistake. While trying to ad...

Anne of Avonlea
by L.M. Montgomery

Five years after Anne Shirley came to the town of Avonlea, she feels (a little) more grown up, but she's still the same skinny, red-headed orphan Matthew and Marilla Cuthbert took in. After putting her dream of attending Redmond College on hold s...

Part adventure tale and part-coming-of-age story, Treasure Island follows Jim Hawkins, an innkeeper's son, as he embarks on a sea adventure after obtaining a treasure map. In his quest to recover a share of the loot, he must negotiate relationships ...

Anne of Ingleside
by L.M. Montgomery

The mother of five, Anne never has a dull moment in her home, and, now with a new baby on the way and insufferable Aunt Mary Maria visiting-and wearing out her welcome-her life is full to bursting. Still, Mrs. Doctor can't think of any place she'd ...

Victor Frankenstein learns the secret of producing life, and so, by putting together parts of various corpses, he creates the Frankenstein monster. The monster is huge and disformed, but he means no harm to anyone--until constant ill treatment drive...

Considered to be French novelist Victor Hugo's masterpiece, Les Miserables, which was published in 1862, is a sprawling historical and philosophical epic that covers from 1815 through the Paris Uprising in 1832. Notable for its many subplots and dig...

The Call of the Wild
by Jack London

Jack London’s The Call of the Wild was written in 1903, but Buck’s gripping adventure makes for a thrilling listen on audio more than 100 years after it was first published.          ...

Lord of the Flies
by William Golding

William Golding's classic novel of primitive savagery and survival is one of the most vividly realized and riveting works in modern fiction. The tale begins after a plane wreck deposits a group of English school boys, aged six to twelve on an isola...