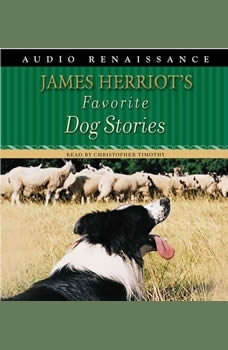 In this very special collection of favorite stories about dogs great and small, James Herriot tells us about his own dogs and all the wonderful people and animals we have come to love so much. Fifty memorable tales move us to both laughter and tears, and Herriot's personal introduction and notes make this tribute by a master storyteller to man's best friend a book to be treasured for many years to come.

Dreams from My Father
by Barack Obama

In this lyrical, unsentimental, and compelling memoir, the son of a black African father and a white American mother searches for a workable meaning to his life as a black American. It begins in New York, where Barack Obama learns that his father&md...

Born on a Blue Day
by Daniel Tammet

One of the world's fifty living autistic savants is the first and only to tell his compelling and inspiring life story—and explain how his incredible mind works. Worldwide, there are fewer than fifty living savants, those autistic individuals...

In a profound, funny, and beautifully rendered portrait of a beloved companion, bestselling novelist Dean Koontz remembers the golden retriever who changed his life. A retired service dog, Trixie was three when Dean and his wife, Gerda, welcomed her...

The Journey of Crazy Horse is the true story of how one man's fight for his people's survival roused his true genius as a strategist, commander, and trusted leader. And it is an unforgettable portrayal of a revered human being and a profound celebra...