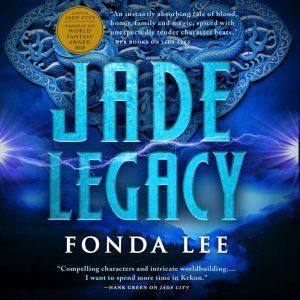 The Kaul siblings battle rival clans for honor and control over an East Asia-inspired fantasy metropolis in Jade Legacy, the page-turning conclusion to the Green Bone Saga.

Jade, the mysterious and magical substance once exclusive to the Green Bone warriors of Kekon, is now coveted throughout the world. Everyone wants access to the supernatural abilities it provides, from traditional forces such as governments, mercenaries, and criminal kingpins, to modern players, including doctors, athletes, and movie studios. As the struggle over the control of jade grows ever larger and more deadly, the Kaul family, and the ancient ways of the Kekonese Green Bones, will never be the same.

Battered by war and tragedy, the Kauls are plagued by resentments and old wounds as their adversaries are on the ascent and their country is riven by dangerous factions and foreign interference. The clan must discern allies from enemies, set aside bloody rivalries, and make terrible sacrifices… but even the unbreakable bonds of blood and loyalty may not be enough to ensure the survival of the Green Bone clans and the nation they are sworn to protect.


Praise for the Green Bone Saga:

"Jade City has it all: a beautifully realized setting, a great cast of characters, and dramatic action scenes. What a fun, gripping read!" —Ann Leckie, winner of the Hugo, Nebula, and Arthur C. Clarke Award Awards