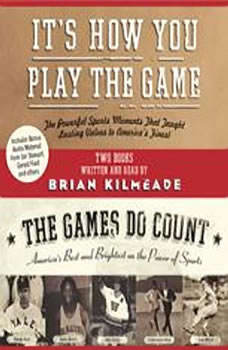 It's How You Play the Game and The Games Do Count

Surprising, entertaining, and always imparting an important life lesson, It’s How You Play the Game features anecdotes and vignettes that are sure to benefit any reader. As Brian Kilmeade writes, "Regardless of who you are, what sport you chose, or how much success you achieved, playing the game is all about getting you ready for life. Winning or losing has little to do with who you will become. Instead, it’s how you prepared for the game that determines whether you’ll be a winner or loser in life."From competition to camaraderie, failure to success, humiliation to glory, individual achievement to teamwork, the world of sports encompasses it all and enriches our lives. The Games Do Count reveals that America’s best and brightest haven’t just worked hard—they’ve played hard—and the results have been staggering!

The most popular sports columnist in America puts his life (and dignity) on the line in search of the most absurd sporting event on the planet.What is the stupidest sport in the world? Not content to pontificate from the sidelines, Rick Reilly set o...