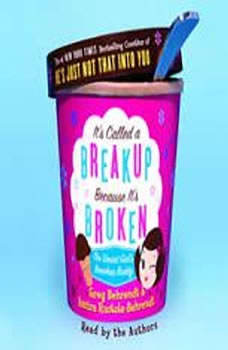 It's Called a Breakup Because It's Broken: The Smart Girl's Break-Up Buddy

There’s no doubt about it—breakups suck. But in the first few hours or days or weeks that follow, there’s one important truth you need to recognize: Some things can’t and shouldn’t be fixed, especially that loser who dumped you or forced you to dump him. It’s over for a reason, and deep down inside you probably know what that reason is. It’s called a breakup because it’s broken, and starting today, you’re not the kind of woman who settles for broken, or hangs on to damaged goods, be it a radio, a pair of shoes, or a relationship. It’s time to get rid of all the broken stuff you’ve been lugging around for days, months, and maybe even years, and make the bold decision to start looking for stuff that works! Because the longer you stay stuck in a dead-end relationship, the less time you get on this planet to experience a great one. So open up this book, and let’s dive in—our goal is to help you turn your breakup into the event that changes your life for the better in ways you never dreamed possible. It’s not an end, it’s a beginning! After all . . . you are a Superfox.

It’s past two in the morning. You’re on your third glass of wine. You’re wearing his sweater because it still smells like him (and quite frankly, he never really smelled that great, but we’ll give it to you). Stamp out that dumb French cigarette and put down that phone. No really, don’t make that call. Why? Because you’re not that girl, looking for another chance with someone who has proven himself unworthy of your greatness. You’re not that girl, sitting alone with a box of tissues when a world full of possibilities waits outside her door. Starting right here, right now, it’s time to dry your tears, put down that pint of ice cream, log out of his email, and open this book to chapter one--and start turning your breakup into a break-over.

The co-author of the smash two-million copy bestseller He’s Just Not That Into You, Greg Behrendt knows that the one thing harder than realizing he’s not that into you is finding the courage to walk away from the relationship. But Greg and his co-author and wife, Amiira, also know that there’s a flip side to every breakup: As dark as everything seems right now, this could be the single best thing that’s ever happened to you.

It’s Called a Breakup Because It’s Broken is the ultimate survival guide to getting over Mr. Wrong and reclaiming your inner Superfox. From how to put yourself through “he-tox,” to how to throw yourself a kick-ass pity party, Greg and Amiira share their hilarious and helpful roadmap for getting past the heartache and back into the game. They give advice on:
•Why you shouldn’t call him—and what he’s thinking when you do
•How to keep your friends and not lose your job
•How to avoid breakup pitfalls: IMing, stalking, having sex with your ex
•Reframing reality—seeing the relationship for what it was
•How to transform yourself into a hot, happening Superfox and get a jump on the better, brighter future that awaits

It’s Called a Breakup Because It’s Broken gives you everything you need to get over him and make the right decisions along the way. Complete with an essential workbook to help you put the crazy down on paper and not take it out into the world, this is a straight-talking, spot-on, must-have manual for finding your way back to an even more rocking you.

Now or Never
by Alexi Panos

I read this book after i broke up with my ex of 2 and a half years. For a self-help book it isnt a big help but if you need a pick me up without a pint of mint choclate chip ice cream this is a book you should read. If you havent had a recent break up then just pick it up to have a good laugh. It is a light hearted and fun read.