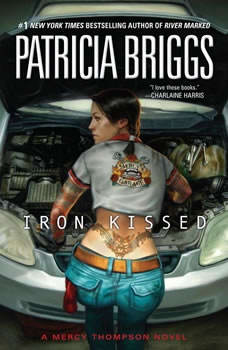 Meet car mechanic and coyote shapeshifter Mercy Thompson, star of Patricia Briggs's #1 New York Times bestselling series. Being a lowly "walker" in a world of vampires, werewolves, and fae once kept her safe. But Mercy's bark-and bite-are not so harmless any more...

Though Mercy Thompson can shift her shape into that of a coyote, her loyalty never wavers. So when her former boss and mentor, Zee, asks for her help, she's there for him. A series of murders has rocked a fae reservation, and Zee needs her unique gifts, namely her coyote sense of smell, to sniff out the killer.

But when Zee is accused of murdering the suspect Mercy outed, he's left to rot behind bars by his own kind. Now it's up to Mercy to clear his name, whether he wants her to or not.

Mercy's loyalty is under pressure from other directions, too. Werewolves are not known for their patience, and if Mercy can't decide between the two she cares for, Sam and Adam may make the choice for her...

This third installment of Mercy had me enthralled from page one. This time around Mercy is helping to her former Boss, when he's suppected of murder. Mercy is thrown into the tight lipped world of the Fae as she goes searching for clues which only puts Mercy into dangerous situation. And after a tragic ordeal Mercy finally lay claim to the man she wants to be with. I loved this story by far it was the best in the series, the only disappoint was the cliffhanger ending.

I loved Mercedes, the VW mechanic from page one, book one. This third installment does not disappoint on any level. The only real problem I have with this series is that the cover art really doesn't match the picture I conjure in my head when I'm reading the description of Mercy and her ONE tattoo. I would recommend reading this series from book one in the correct order. If you read them out of order you just won't enjoy them as much.

From Moon Called to Blood Bound to Iron Kissed, this has been an amazing series. It has been a very hard series to finish only because I did not want it to end. I highly recommend this book. You will not be sorry.