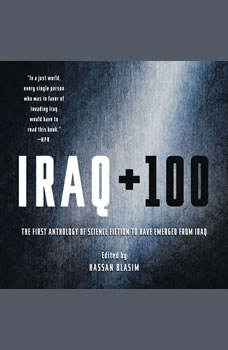 Iraq + 100: The First Anthology of Science Fiction to Have Emerged from Iraq

"Peter Ganim was just the right choice to narrate this audiobook" — AudioFile MagazineA groundbreaking audiobook anthology of science fiction from Iraq that will challenge your perception of what it means to be “The Other.”This collection of short stories is masterfully edited by Hassan Blasim and features the following authors:Hassan Blasim (translated by Jonathan Wright)Ali Bader (translated by Elisabeth Jaquette)Diaa Jubaili (translated by Andrew Leber)Mortada Gzar (translated by Katharine Halls)Zhraa Alhaboby (translated by Emre Bennett)Khalid Kaki (translated by Adam Talib)Jalal Hasan (translated by Max Weiss)Anoud (translated by herself)Hassan Abdulrazzak (translated by himself)Ibrahim al-Marashi (translated by himself)“History is a hostage, but it will bite through the gag you tie around its mouth, bite through and still be heard.”—Operation DanielIn a calm and serene world, one has the luxury of imagining what the future might look like.Now try to imagine that future when your way of life has been devastated by forces beyond your control.Iraq + 100 poses a question to Iraqi authors (those who still live in that nation, and those who have joined the worldwide diaspora): What might your home country look like in the year 2103, a century after a disastrous foreign invasion?Using science fiction, allegory, and magical realism to challenge the perception of what it means to be “The Other,” this groundbreaking anthology contains stories that are heartbreakingly surreal, and yet utterly recognizable to the human experience. Though born out of exhaustion, fear, and despair, Iraq + 100 is also fueled by themes of love, family, and endurance, and woven through with a delicate thread of hope for the future.

The Best Horror of the Year Volume El...
by Ellen Datlow