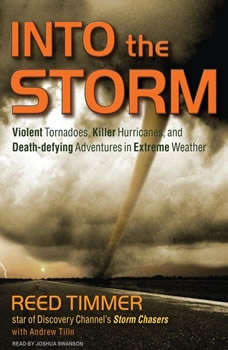 Into the Storm: Violent Tornadoes, Killer Hurricanes, and Death-defying Adventures in Extreme Weather

Reed Timmer is one of the most successful and most extreme storm chasers in the world. His is a job that requires science and bravado, knowledge and instinct just to survive, never mind excel. It's a job some people would kill for. But most prefer to let Timmer take the risks while they watch from the safety of their homes. Reed Timmer is a star of Storm Chasers, one of the Discovery Channel's top-rated shows. Into the Storm is Timmer's dramatic account of his extraordinary profession. Each chapter features the story of one of the three-hundred-plus extreme tornadoes, hurricanes, or blizzards that Timmer has intercepted over the last decade—storms that include the killer F5 tornado that struck Moore, Oklahoma, in May 1999; the unprecedented, devastating storm surge of Hurricane Katrina; and the little-studied but enormously powerful storm systems in places like Canada and Argentina, including a recent trip in which Timmer realized he was the only storm chaser in South America and was able to intercept super cells in the most prolific hail-producing region in the world. As a Ph.D. candidate in meteorology, Timmer is after more than just an adrenaline rush—his stories feature fascinating insights into the science of storms and how the data he is collecting will someday save lives. With a firsthand perspective on the storm-chasing community, Timmer also takes listeners inside this world, examining his controversial obsession and the ethical debates it sparks. Featuring the same you-are-there immediacy that attracts more than 100,000 visitors to Timmer's Web site every month, Into the Storm is one wild—and informative—ride.

The Weather Detective
by Peter Wohlleben