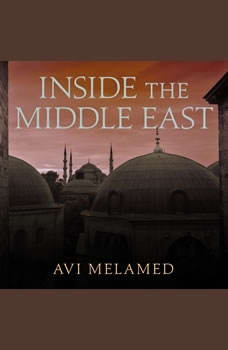 Inside the Middle East: Making Sense of the Most Dangerous and Complicated Region on Earth

Acclaimed Israeli intelligence analyst Avi Melamed has spent more than thirty years interpreting Middle East affairs. His long-awaited Inside the Middle East challenges widely accepted perceptions and provides a gripping and uniquely enlightening guide to make sense of the events unfolding in the region. Melamed considers all the major power players in the Middle East, explains the underlying issues, and creates a three-dimensional picture, an illustration that connects the dots and provides a fascinating road map. He elucidates developments such as the Arab Spring, the downfall of the Muslim Brotherhood, the rise of ISIS, the epic Sunni-Shiite animosity, the essence of the war in Syria, the role of the Caliphate and Jihad, and the looming nuclear arms race. He also provides a rare opportunity to journey into the psyche of Arab society. This unparalleled volume is a milestone in our understanding of the Middle East. It is the untold story of the struggles that will shape the region, and the world, for decades to come, and a groundbreaking guide that will shake you to the core, force you to reevalute your outlook, and give you tips to navigate the future.

A Rage for Order
by Robert Worth

The definitive work of literary journalism on the Arab Spring and its troubled aftermathIn 2011, a wave of revolution spread through the Middle East as protesters demanded an end to tyranny, corruption, and economic decay. From Egypt to Yemen, a gen...

From an award-winning journalist, a brave and necessary immersion into the everyday struggles of Palestinian life  Over the past three years, American writer Ben Ehrenreich has been traveling to and living in the West Bank, staying with Palesti...

When the Bush Administration invaded Iraq in 2003, it was promised that Iraqi Kurdistan would be developed into one of the most productive oil and natural gas regions in the world, and the profits would be used to win the war and rebuild the country...

The Way of the Knife
by Mark Mazzetti

Pulitzer Prize winner Mark Mazzetti examines these secret wars over the past decade, tracking key characters from the intelligence and military communities across the world. Among the characters we meet in The Way of the Knife are a young CIA office...

Blending memoir, journalism, and history, Notes on a Foreign Country is a moving reflection on America's place in the world. It is a powerful journey of self-discovery and revelation?a profound reckoning with what it means to be American in a moment...

The Only Language They Understand
by Nathan Thrall

Scattered over the territory between the Jordan River and the Mediterranean Sea lie the remnants of failed peace proposals, international summits, secret negotiations, UN resolutions, and state-building efforts. The conventional story is that these ...

Let There Be Water
by Seth M. Siegel

As every day brings urgent reports of growing water shortages around the world, there is no time to lose in the search for solutions. The United States government predicts that forty of our fifty statesand 60 percent of the earths land surfacewill ...

Global refugee numbers are at their highest levels since the end of World War II, but the system in place to deal with them, based upon a humanitarian list of imagined "basic needs," has changed little. In Refuge, Paul Collier and Alexander Betts ar...

There was a time when Israel could do no wrong in America's eyes. That time is long past, and justly so-no nation is absolutely perfect, particularly not one who is engaged in a conflict as long as the Arab-Israeli conflict. But the myth of the perf...