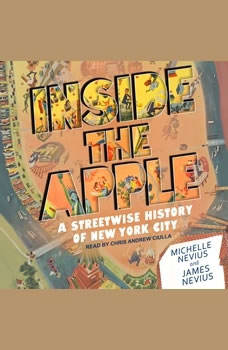 Inside the Apple: A Streetwise History of New York City

How much do you actually know about New York City? Did you know they tried to anchor Zeppelins at the top of the Empire State Building? Or that the high-rent district of Park Avenue was once so dangerous it was called "Death Avenue"? Lively and comprehensive, Inside the Apple brings to life New York's fascinating past. This narrative history of New York City is the first to offer practical walking tour know-how. Fast-paced but thorough, its bite-size chapters each focus on an event, person, or place of historical significance. Rich in anecdotes, it whisks listeners from colonial New Amsterdam through Manhattan's past, right up to post-9/11 New York. This energetic, wide-ranging, and often humorous book covers New York's most important historical moments, but is always anchored in the city of today.

From John Strausbaugh, author of City of Sedition and The Village, comes the definitive history of Gotham during the World War II era. New York City during World War II wasn't just a place of servicemen, politicians, heroes, G.I. Joes and Rosie the...