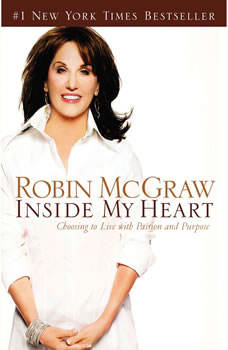 Inside My Heart: Choosing to Live with Passion and Purpose

I believe we were put on this earth to enjoy lives of joy and abundance, and that is what I want for you and for me. It's not my intention to give people advice on how to solve their problems (I leave that to my husband). But I've had my share of struggles over the years, and I know a thing or two about what has worked for me. I have chosen to be an active participant in my life rather than a spectator, and in so doing I have chosen how to be a woman, how to be a wife, and how to be a mother in ways that are uniquely my own. I offer the stories of these choices as evidence of the power of sheer determination, will, and faith in God.

You've seen her on television with her husband, Dr. Phil. But now it's time for a heart-to-heart conversation with Robin McGraw. In Inside My Heart, Robin speaks woman to woman, inspiring you to embrace and celebrate the many roles you play and encouraging you to make deliberate choices that lead to a richer, happier, and more meaningful life.

She shares with you the life-changing moments of her childhood years, dating and marrying Dr. Phil McGraw, raising two sons, and asserting herself as a woman in a man's world to show you that you have the power to make choices in your life. In fact, she's convinced that you must choose to go after the life you want.

With a deep and abiding faith in God, Robin McGraw shares her story so you too can make choices that reflect your own heart's truest priorities and highest goals.