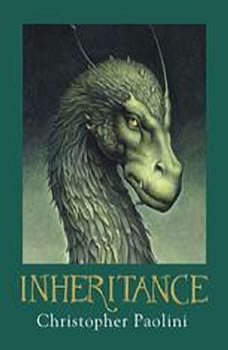 Not so very long ago, Eragon—Shadeslayer, Dragon Rider—was nothing more than a poor farm boy, and his dragon, Saphira, only a blue stone in the forest. Now the fate of an entire civilization rests on their shoulders.

Long months of training and battle have brought victories and hope, but they have also brought heartbreaking loss. And still, the real battle lies ahead: they must confront Galbatorix. When they do, they will have to be strong enough to defeat him. And if they cannot, no one can. There will be no second chances.

The Rider and his dragon have come further than anyone dared to hope. But can they topple the evil king and restore justice to Alagaësia? And if so, at what cost?

This is the much-anticipated, astonishing conclusion to the worldwide bestselling Inheritance cycle.

Dive, run, and soar through this exhilarating special edition in the NEW YORK TIMES bestselling series, with a story by WILD BORN author, Brandon Mull. In the world of Erdas, there's a story of four noble animals who sacrificed everything to prote...

Nick Gautier's day just keeps getting better and better. Yeah, he survived the zombie attacks, only to wake up and find himself enslaved to a world of shapeshifters and demons out to claim his soul.His new principal thinks he's even more of a hoodlu...

Charlie Bone and the Castle of Mirrors
by Jenny Nimmo

Charlie Bone’s power takes on a new dimension at Bloor’s Academy in Charlie Bone and the Castle of Mirrors. There is a new cast of characters, including Mr. Pilgrim’s replacement, Tantalus Ebony, and the mysterious new student Josh...

The Cry of the Icemark
by Stuart Hill

After the death of her beloved father, headstrong princess Thirrin Freer Strong-In-The-Arm becomes warrior queen of her homeland, Icemark, defending it from a formidable invader. Despite Thirrin's bravery and the support of Oskan, the Witch's son, ...