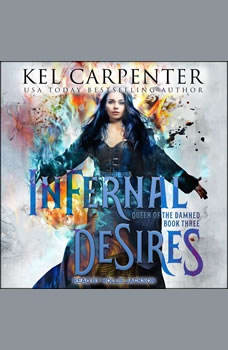 Series: Queen of the Damned #3

They say there's no rest for the wicked, and New Orleans never knew how true that was until I came to town. Nobody told me that when I entered the transition, the very gifts of my demonic lineage would be used against me. Nobody warned me that the flames of Hell would burn from within. Or that I'd be driven to lust and madness, my chaotic magic becoming more wild and unruly than ever before. The only way to save myself—and the world—was to give the beast what she wanted: control. As if transitioning wasn't enough, my presence was now known, and my enemies were mounting. While the beast was intent on claiming our Four Horsemen, there were things to be done. People to find. Demons to kill. And when they make a deal with the devil—let's just say that neither world will ever be the same again. Long live the Queen. If I can survive becoming immortal, that is. Contains mature themes.

Queen of the Damned Bundle

Infernal Desires
Queen of the Damned #3

Lucifer's Daughter
Queen of the Damned #1

Wicked Games
Queen of the Damned #2