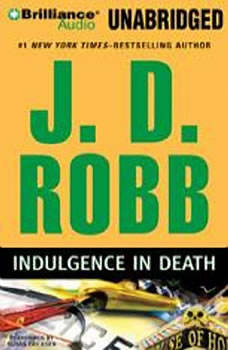 When a murder disrupts the Irish vacation she is taking with her husband, Roarke, Eve realizes that no place is safe—not an Irish wood or the streets of the manic city she calls home. But nothing prepares her for what she discovers upon her return to the cop shop in New York City.... A driver for a top-of-the-line limousine service is found dead—shot through the neck with a crossbow. The car was booked by an executive at a venerable security company whose identity had been stolen. Days later, a stunning, high-priced escort is found killed at Coney Island, a bayonet stuck in her heart. And again, the trail leads to a CEO whose information has been hijacked. With a method established, but no motive to be found, Eve begins to fear that she has come across that most dangerous of criminals, a thrill killer, but one with a taste for the finer things in life—and death. Eve does not know where or when the next kill will be, or that her investigation will take her to the rarefied circle that Roarke travels in—and into the perverted heart of madness....

Indulgence in Death
In Death Series #31