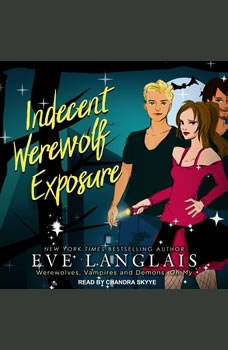 It's TGIF, which means in a few hours I'll be tossing back a few martinis with my best friend, Brenda. First, though, I need to deal with my crazy new client, a werewolf who thinks it's okay to pee on his neighbor's flowers because she's a witch. What a shame he's obviously got a few screws loose, because bad-boy Pete is seriously hot. His insanity must be contagious, because I did the craziest thing later that night. I let my nemesis in the courtroom, assistant DA Anthony Vanderson, seduce me. In my defense, he's got mesmerizing blue eyes—and a seriously sexy bod. With my sexual itch scratched, I should be able to go back to my awesome life as a single gal. Nope. My bad-boy werewolf is determined to chase me, but he's got competition because Anthony is also determined to make me his. What's a poor girl to do? According to my best friend, both of them. But I'm not ready to settle down in a threesome, even if the tax breaks are awesome. Just like how I don't want to get involved in the investigation surrounding the gory murder of some supposed witches. I guess a girl can't always get what she wants—but boy, do my two suitors know how to give me what I need. Contains mature themes.