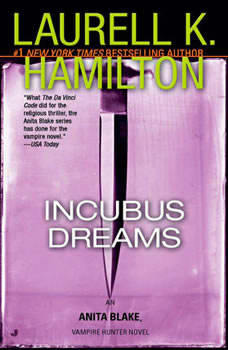 Vampire hunter Anita Blake finds her life is more complicated than ever, caught as she is between her obligations to the living-and the undead.

The Tower and the Hive
by Anne McCaffrey

For generations, the descendants of the powerful telepath known as the Rowan have used their various talents to help mankind - some are telepaths, others can teleport through space, others are empathic healers. The clan has grown powerful. They hav...

A Caress of Twilight
by Laurell K. Hamilton

I am Princess Meredith, heir to a throne - if I can stay alive long enough to claim it. My cousin, Prince Cel, is determined to see that I don't. As long as we both live, we are in a race for the crown: Whichever one of us reproduces first gets the ...

I am Princess Meredith, heir to a throne of fairie. My day job, once upon a time, was as a private detective in Los Angeles. Unfortunately, princess has now become a full-time occupation.My aunt, Queen Andais, will have it no other way. And so I am ...

Vampire hunter Anita Blake is called on to raise the dead-while trying to suppress her ever-growing feelings for a certain wereleopard.

The Harlequin
by Laurell K. Hamilton

Into Anita Blake's world-a world already overflowing with power-come creatures so feared that centuries-old vampires refuse to mention their names.

A Kiss of Shadows
by Laurell K. Hamilton

"All it would take was my true name being mentioned after dark, and it would float back to my aunt. She was the Queen of Air and Darkness, and that meant that anything said in the dark was hers to hear, eventually. The fact that spotting the missing...