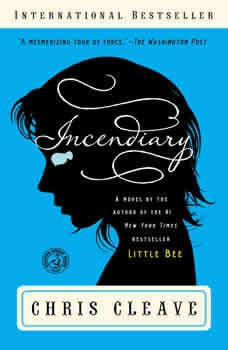 Chris Cleave’s debut novel Incendiary—winner of the Book-of-the-Month Club’s First Fiction Award and the Commonwealth Writers’ Prize—is sure to captivate the same people who made Little Bee one of the most talked-about novels of the last decade.Written as an open letter to Osama bin Laden from a distraught woman whose husband and son were killed in a massive suicide bombing, Incendiary was published in the UK on July 7, 2005— eerily, the day of the London underground bombings. It went on to win the 2006 Somerset Maugham Award; was shortlisted for the 2006 Commonwealth Writers’ Prize; won the United States’ Book-of-the-Month Club’s First Fiction Award; and won the Prix Special du Jury at the French Prix des Lecteurs 2007.