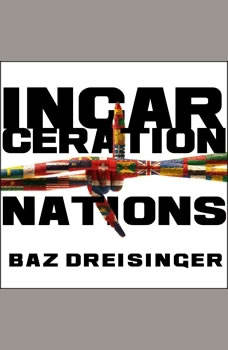 Incarceration Nations: A Journey to Justice in Prisons Around the World

Beginning in Africa and ending in Europe, Incarceration Nations is a first-person odyssey through the prison systems of the world. Baz Dreisinger, a professor, journalist, and the founder of the Prison-to-College Pipeline, looks into the human stories of incarcerated men and women and those who imprison them, creating a jarring, poignant view of a world to which most are denied access. From serving as a restorative justice facilitator in a notorious South African prison and working with genocide survivors in Rwanda, to launching a creative writing class in an overcrowded Ugandan prison and coordinating a drama workshop for women prisoners in Thailand, Dreisinger examines the world behind bars with equal parts empathy and intellect. She journeys to Jamaica to visit a prison music program, to Singapore to learn about approaches to prisoner reentry, to Australia to grapple with the bottom line of private prisons, to a federal supermax in Brazil to confront the horrors of solitary confinement, and finally to the so-called model prisons of Norway. Incarceration Nations concludes with climactic lessons about the past, present, and future of justice.

There's never been a better time for buying rental properties—interest rates are low, and credit is more freely available to those who want to buy and invest. But where does one begin? With more than twenty-plus years of experience in real es...

“A wonderfully vivid portrait of the man behind Sherlock Holmes . . . Like all the best historical true crime books, it’s about so much more than crime.”—Tana French, author of In the WoodsOne of USA Today’s “Five...

Idea to invention
by Patricia Nolan-Brown

You don't have to be a mechanical genius to be an inventor. Anyone can invent - a parent wrestling with a baby sling ...a coach frustrated with slick-soled running shoes ...an office worker determined to keep the computer cords untangled. Inventing ...

The Philosophy, Practice, and Science of Crime Scene Investigation
by Robert C. Shaler

The director of the Forensic Science Program at Pennsylvania State University, Professor Robert C. Shaler leads a comprehensive study of the intricacies of an intriguing, and always topical, science. In these lectures, Shaler imparts a clear underst...

The Law was originally published as a pamphlet in French in 1850 by Frederic Bastiat. It is his most famous work and was written two years after the third French Revolution of 1848. It defines, through development, a just system of laws and then dem...

An urgent expose of the mental health crisis in our courts, jails, and prisons. America has made mental illness a crime. Jails in New York, Los Angeles, and Chicago each house more people with mental illnesses than any hospital. As many as half of ...

Thirty years after Scott Turow entered law school comes an all new unabridged production of this classic with a special introduction by and interview with the authorONE L, Scott Turow's journal of his first year at law school and a bestseller when i...

A noble profession is facing its defining moment. From law schools to the prestigious firms that represent the pinnacle of a legal career, a crisis is unfolding. News headlines tell part of the story-the growing oversupply of new lawyers, widespread...