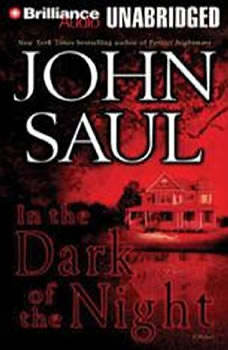 In the Dark of the Night

It has waited seven years for someone to come back to the rambling lakeside house called Pinecrest, which has stood empty since its last owner went missing. For upscale Chicago couple Dan and Merrill Brewster, the old midwestern manse is an ideal retreat, and for their kids, Eric and Marci, it’s the perfect place to spend a lazy summer exploring. Which is how Eric and his teenage friends discover the curious cache of discarded objects stowed in a hidden room of Pinecrest’s carriage house. The bladeless hacksaws, shadeless lamps, tables with missing legs, headless axe handle, and other unremarkable items add up to a pile of junk. Yet someone took the trouble to inventory each worthless relic in a cryptic ledger. The more the boys devote themselves to restoring the forgotten possessions and piecing together the puzzle behind them, the more their fascination deepens into obsession. When a horrifying discovery surfaces, so does the chilling truth about the terrifying events that rocked the town seven years before, the mysterious disappearance of Pinecrest’s last resident, and a twisted legacy with a malevolent life of its own…and a bottomless hunger for new victims.

Now a major motion picture starring Matthew McConaughey and Idris ElbaAll good things must come to end. Constant Listener, and not even Stephen King can write a story that goes on forever. The tale of Ronald Deschain's relentless quest for the Dark ...

Across America a mysterious disease is turning ordinary people into raving, paranoid murderers who inflict brutal horrors on strangers, themselves, and even their own families. Working under the government’s shroud of secrecy, CIA operative De...

Fifteen-year-old Matt Moore seems to have it all: a loving mother, a caring stepfather, a host of friends, and a growing relationship with the most beautiful girl in school. All signs point to a bright future, until fate intervenes. After a sudden f...

In picturesque Moonlight Cove, California, inexplicable deaths occur and spine-tingling terror descends to this "edge of paradise." Growing numbers of residents harbor a secret so dark it is sure to cost even more lives.Tessa Lockland comes to town...

There's a reason cell rhymes with hell. On October 1st, God is in His heaven, the stock market stands at 10,140, most of the planes are on time, and Clayton Riddell, an artist from Maine, is almost bouncing up Boylston Street in Boston. He's just ...

On an entirely normal, beautiful fall day in Chester's Mill, Maine, the town is inexplicably and suddenly sealed off from the rest of the world by an invisible force field. Planes crash into it and fall from the sky in flaming wreckage, a gardener's...

Amanda: A century ago, a gentle blind girl walked the cliffs of Paradise Point. Then the children came - taunting, teasing - until she lost her footing and fell, shrieking her rage to the drowning sea... Michelle: Now Michelle has come from Boston t...

Bag Of Bones
by Stephen King

Set in the fictional town of Castle Rock, Maine Stephen King's most gripping and unforgettable novel, Bag of Bones, is a story of grief and lost love's enduring bonds, of a new love haunted by the secrets of the past, of an innocent child caught in ...