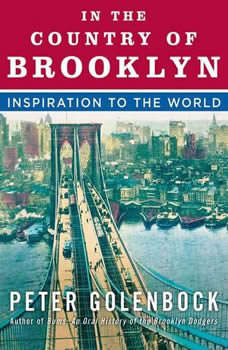 In the Country of Brooklyn: Inspiration to the World

What is Brooklyn? A bedroom suburb of Manhattan? A crumbling relic of urban decay? A collection of gorgeous million dollar brownstones? A magnet for artists and writers and hipsters and yuppies and new immigrants and real estate developers? A hotbed of political activists? A breeding ground for mobsters? A place to achieve the American dream? A living, breathing piece of American history? A state of mind? It’s all these things—and more.Peter Golenbock—the Studs Terkel of sportswriting—writes terrific oral histories, capturing first person history on paper. The author of the terrific Bums: An Oral History of the Brooklyn Dodgers back in 1984, Golenbock returns to Brooklyn for a look at the Borough Beyond the Dodgers. Once the fourth largest city in America--Brooklyn became part of the Greater New York City in 1898--the 71 square miles comprising the Borough of Brooklyn is currently home to nearly two and a half million people. Golenbock gets the first-hand story of some of Brooklyn’s important neighborhoods, institutions, people and peculiar characters from across the decades--from the early years of the 20th Century right up to the present. Although for some people time may have stopped in Brooklyn the day the Dodgers left, a lot has happened in the last 50 years. Some of it has been good, some of it has been awful, but through it all, Brooklynites have persevered and flourished. While In the Country of Brooklyn can’t be all-inclusive, it will provide a dazzling array of what Brooklyn means and has meant to so many--white, black, Latino, from every ethnic background imaginable!