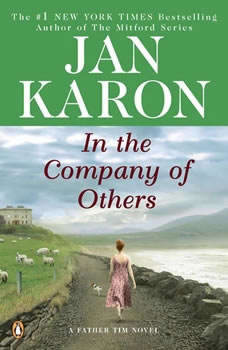 In the Company of Others: A Father Tim Novel

Follow Father Tim and Cynthia on their journey to research his Kavanagh ancestry in the Irish countryside.

Vacation—the very word has been foreign to Episcopal priest Tim Kavanagh. Now retired from tending his flock in the village of Mitford, he is making good on a promise to show his wife, Cynthia, the charming land of his Irish ancestors. But after arriving at a Lough Arrow fishing lodge in the midst of a torrential downpour, the charm disappears.

They find their holiday upended by an intruder, a treasured painting is stolen from the lodge, and a family conflict dating back nearly a century turns even more bitter. As three generations struggle to find deliverance from the crucifying power of secrets, Tim and Cynthia stumble upon a faded journal that might just explain the crime—and offer a chance at redemption.

Shepherds Abiding, including Esther's Gift and the Mitford Snowmen
by Jan Karon

Since he was a boy growing up in Missisippi, Father Tim has lived what he calls “the life of the mind.”  Except for cooking and gardening and washing his dog, he never learned to savor the work of his hands.  And then he finds ...

You are about to travel to Edgecombe St. Mary, a small village in the English countryside filled with rolling hills, thatched cottages, and a cast of characters both hilariously original and as familiar as the members of your own family. Among them ...

A Light in the Window
A Mitford Novel #2