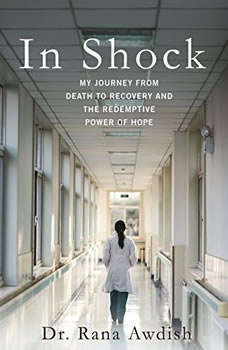 In Shock: My Journey from Death to Recovery and the Redemptive Power of Hope

Now a Los Angeles Times BestsellerThe New York Times Book Review: "Awdish's book is the one I wished we were given as assigned reading our first year of medical school, alongside our white coats and stethoscopes...dramatic, engaging and instructive."A riveting first-hand account of a physician who's suddenly a dying patient and her revelation of the horribly misguided standard of care in the medical worldDr. Rana Awdish never imagined that an emergency trip to the hospital would result in hemorrhaging nearly all of her blood volume and losing her unborn first child. But after her first visit, Dr. Awdish spent months fighting for her life, enduring consecutive major surgeries and experiencing multiple overlapping organ failures. At each step of the recovery process, Awdish was faced with something even more unexpected: repeated cavalier behavior from her fellow physicians―indifference following human loss, disregard for anguish and suffering, and an exacting emotional distance. Hauntingly perceptive and beautifully written, In Shock allows the reader to transform alongside Awidsh and watch what she discovers in our carefully-cultivated, yet often misguided, standard of care. Awdish comes to understand the fatal flaws in her profession and in her own past actions as a physician while achieving, through unflinching presence, a crystalline vision of a new and better possibility for us all. As Dr. Awdish finds herself up against the same self-protective partitions she was trained to construct as a medical student and physician, she artfully illuminates the dysfunction of disconnection. Shatteringly personal, and yet wholly universal, she offers a brave road map for anyone navigating illness while presenting physicians with a new paradigm and rationale for embracing the emotional bond between doctor and patient.