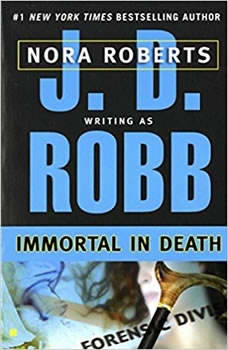 She was one of the most sought after women in the world. A top model who would stop at nothing to get what she wanted - even another woman's man. And now she was dead, the victim of a brutal murder. Police lieutenant Eve Dallas put her professional life on the line to take the case when suspicion fell on her best friend, the other woman in the fatal love triangle. Beneath the façade of glamour, Eve found that the world of high fashion thrived on an all-consuming obsession for youth and fame. One that led from the runway to the dark underworld of New York City where drugs could be found to fulfill any desire - for a price . . .

This is the 3rd book in the Eve Dallas/Roarke series. i had both #2 and 3 at home, and the books are kind of small, so i started number three within minutes of finishing 2, just as if they were one larger book. On the backstory, this book was really emotional, with a lot of breakthroughs. The backstory got moved along way more than it did in 2. The crime story was about illegal drugs and murder, and was quite interesting and realistic, seeing how all of these people, both beautiful people, and street people, got so hooked on a drug. I sort of suspected the ending, but i wasn't sure, and i liked it. I read this book in less than 24 hours, and i wish i had #4 right now to read, but sadly i dont. i am really getting into the characters in this book! They are totally people i would enjoy being around, which is not often the case.

Immortal in Death
In Death Series #3